Forbidden Lore – Path of The Seer 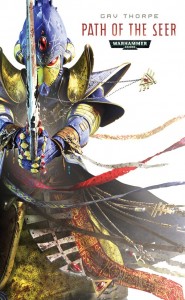 For our next Forbidden Lore segment we cover the new 40k Novel Path of The Seer by none other than Gav Thorpe! This is the second novel in his Eldar Trilogy and if it is anything as good as the first - it should be a lot of fun to read!

Make sure you pick up a copy and read along with us as we see what happens with Thirianna as she embarks on The Path of The Seer!

This segment will air when episode 37 drops on Sept 18th.

The ancient eldar are a mysterious race and each devotes their life to a chosen path that will guide their actions and decide their fate. Thirianna abandons her simple existence to embark upon the mysterious Path of the Seer. She will tread a dark and dangerous road that leads her to the other realm of the warp, where daemons are made flesh and nightmares are manifest, for only there can she realise her psychic abilities. After unleashing her powers in battle and communing with the spirits of her craft world, Thirianna turns her skills to discerning the future amidst the myriad strands of fate. Her visions reveal a great threat descending on Alaitoc, and both the living and the dead will march to war to defend it.