Forbidden Lore – Legion of The Damned

Our next Forbidden Lore segment in which we cover the new Space Marines Battle Book Legion of The Damned by Rob Sanders! We really loved Robs last outing into the 40k Universe (Atlas Infernal) and we are pretty certain we are going to like this one as well. Not only that - but we are going to have a discussion with Rob Sanders himself about this book during the Forbidden Lore segment. So this promises to be a truly great one.

Grab a copy (If you haven't already!) and read along with us this month!

This segment will air 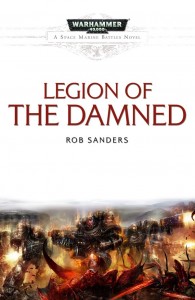 Following the trajectory of a blood-red comet, the berserk World Eaters blaze a path of destruction across the galaxy in its wake. The small cemetery world of Certus Minor appeals to the Space Marines of the Excoriators Chapter for protection, but the force dispatched to deal with this grim threat is far too small and their losses against the renegades are high. Just as all seems lost, salvation is borne out of legend itself as sinister spectral warriors descend upon this planet of the dead, and the enemies of the Imperium come face to face with those who have already travelled beyond the realm of the living...