You there, soldier! Don’t know a las-cutter from a lascannon? Not sure which prayer to the God-Emperor will protect you from enemy artillery fire? Need to know how to survive an explosive decompression on your drop ship, or set up a crossfire ambush in a death world jungle? Better consult the handbook. The Munitorum adepts give us these things for a reason, you know... 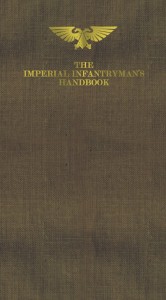 These books, (now a single volume) were originally released several years ago, and provide an in-character and often humorously brutal view of life as a standard Imperial Guardsman. This is the 41st Millennium take on the Basic Soldiers Field Guide, of which versions are still in use across many modern armies today.

We will take a look at these books and speak to Graham McNeill, the original author of the Imperial Munitorum Manual, to get an insiders view of what thoughts went into writing them!

Until that time, as the Uplifting Primer tells us "You may find your squad being led by a commissar. If so, count yourself lucky! No enemy can stand to look a commissar in the eye!"

This Forbidden Lore segment is schedule to be included with Episode 68 of The Independent Characters. As it is not a typical novel, we don't feel like talking about it in depth will reveal any "spoilers" so you should feel free to listen to this segment even if you haven't read the books!