Review – Bloodquest : Prisoners of the Eye of Terror

Travelling across the daemon world of Eidolon in search of the stolen Blade Encarmine, Blood Angels Captain Leonatos and his battle-brothers encounter survivors from the 409th Kadmeian Janissaaries regiment of the Imperial Guard. To their surprise, the exiles recognize the name - the regiment fought alongside the Blood Angels centuries ago. Can they still be trusted after servitude in the Eye of Terror, or are they as much of a threat to Leonatos as the daemons they fight. 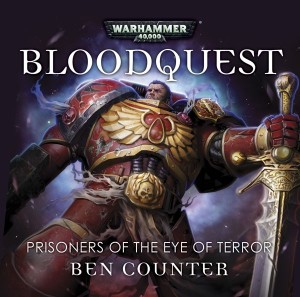 Bloodquest is an Audio Drama by Black Library and Heavy Entertainment that is releasing January 2013. The current description on the Black Library site is actually incorrect in its synopsis of the story.

Ben Counter, the author of this audio drama is well known for his writing of the Soul Drinkers series as well as the original Grey Knight series. While I am not a huge fan of those series, I will admit there are some good aspects and stories within there.

However the scripting in Bloodquest is truly sub-par. The story itself is lacking in any real depth and quite honestly the characters actions and reactions to many of the situations they are put into are not believable, even in the context of the 41st Millennium.

I am also not truly a big fan of The Blood Angels, but this story doesn't do anything to help change that feeling on my part either.

Unlike the recently reviewed Garro: Sword of Truth, I found the voice acting to be less than engaging and the sound effects were a bit over the top. It seems to me that this is more prevalent with the audio dramas that are presented in conjunction with Heavy Entertainment, than those that are done with Big Finish. Big Finish productions seem to have much more polish, a better stable of voice actors, and a clearer understanding of balance of story and sound effects.

The story takes place entirely on a demon world, where the Blood Angels, and in particular Leonatos, are on a quest of penance. In the process, they come across some survivors of an Imperial Guard unit that they had previously sworn a Blood Oath with, agreeing to help each other at any time in the future.

As usual there is a twist to the story, but it is both predictable and underwhelming when it comes. The story stumbles along without seeming to really progress for quite awhile, and in the end you aren't sure that anything has really even been accomplished, other than 70 minutes of your time being wasted.

I am a pretty big fan of the audio dramas, but this is certainly not one of them that I enjoyed. Save your money and skip this one.