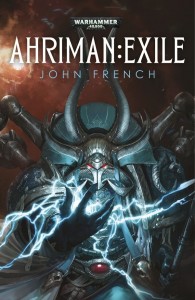 Ahriman: Exile by John French, is our next novel for The Forbidden Lore segment. This novel is currently available via eBook format. So pick it up now before the segment and be sure to read it before we go into an in depth, spoiler filled discussion!

Hopefully we can get John French to join us for this conversation as well and give us some of his insights...

This Forbidden Lore segment will air in episode in Episode 72, which is schedule for Feb 2, 2013.

All is dust... Spurned by his former brothers and his father Magnus the Red, Ahriman is a wanderer, a sorcerer of Tzeentch whose actions condemned an entire Legion to an eternity of damnation. Once a vaunted servant of the Thousand Sons, he is now an outcast, a renegade who resides in the Eye of Terror. Ever scheming, he plots his return to power and the destruction of his enemies, an architect of fate and master of the warp.