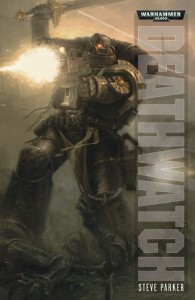 Deathwatch by Steve Parker, is our next novel for The Forbidden Lore segment.

This really exciting book has recently released and available now through the Black Library web site, GW Stores and other book sellers. So pick it up before the segment and be sure to read it before we go into an in depth, spoiler filled discussion! We have really enjoyed it and it has even gotten Carl excited to start playing the Deathwatch RPG! In his words "It has everything a Space Marine novel should have!".

Not only that - we have arranged to have the author of Deathwatch himself, Steve Parker, join us for this look into one of the most secretive units of Space Marines!

This Forbidden Lore segment will air in episode in Episode 82, which is schedule for July 21st, 2013.

If you enjoy Deathwatch, Steve Parker also has a few other short stories about Talon Squad - The Deathwatch Team covered in Deathwatch. You can find them here:

When they first came together, Talon Squad were a disparate group of Space Marines from various Chapters. Under the auspice of the Deathwatch, trained in an ironclad Watch Fortress, they become a kill-team. Alien hunters, experts in xenos extermination, their first mission under the mysterious Inquisitor Sigma is a deadly one. Of all the enemies the Deathwatch face, the genestealers are amongst the fiercest, the most invidious. Led by Brother-Librarian Karras, Talon Squad must penetrate the bowels of a genestealer lair and put the abominations to the flame or face the consequences of an entire planet's extinction.