Forbidden Lore: The Death of Integrity

Having tracked a genestealer brood across the sector, Chapter Master Caedis of the Blood Drinkers calls upon his old allies in the Novamarines to assist in the destruction of the space hulk designated Death of Integrity. But before they can unleash their plasma torpedoes, the Adeptus Mechanicus intervene and task both Chapters with a secretive mission into the heart of the hulk. With deadly xenos creatures seemingly lurking around every corner, Caedis treads a fine line between glorious victory and the damnation of eternal bloodlust carried by all sons of Sanguinius. 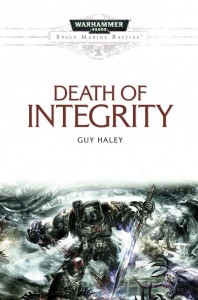 Guy Haley is one of our favorite Black Library authors and people! The Death of Integrity is a great adventure book in the 40k Universe and we don't think you will be disappointed!

Hopefully, we will be able to get him to join us for a discussion of The Death of Integrity!

This book will be released on Friday the 23rd of August. All physical pre-orders will start shipping in the week commencing the 19th of August. It is already available in ebook format!

The Forbidden Lore segment will air with Episode 86!