Forbidden Lore – The Talon of Horus by Aaron Dembski-Bowden

When Horus fell, his Sons fell with him. A broken Legion, beset by rivalries and hunted by their erstwhile allies, the former Luna Wolves have scattered across the tortured realm of the Eye of Terror. And of Abaddon, greatest of the Warmaster’s followers, nothing has been heard for many years. But when Horus’s body is taken from its resting place, a confederation of legionaries seek out the former First Captain, to convince him to embrace his destiny and continue what Horus began. 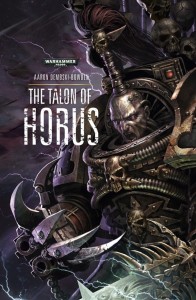 We haven't done a Forbidden Lore segment in quite some time, but this is the one we have been holding out for! The Talon of Horus is an amazing novel that was released in a collectors edition format first, but now is about to be released in ebook and hardback edition for the wider audience. So we are going to give you some time to read through this book before we dissect it with none other than the author himself, Aaron Dembski-Bowden!

We want to make sure everyone has time to read through it and enjoy it - but you won't want to miss out on the first book in an incredibly exciting new series that we think will catapult The Black Legion to the top of everyone's favorite Chaos Space Marine armies as it redefines the meaning of cool.

This Forbidden Lore Segment will drop with Episode 115 of The Independent Characters. (Scheduled for 11/09/2014 however with the Black Library Weekender the weekend just prior this MIGHT be slightly delayed...)

We hope you are as excited about this as we are! Be sure to pick up your copy of The Talon of Horus here:

The Forbidden Lore segment will air with Episode 86!