Where do I start learning about Warhammer 40,000?

I have seen this topic come up probably fifty times on various forums and Facebook Groups. "I want to learn more about Warhammer 40,000 and I don't know where to start. What Black Library books should I start with?

Many times I see people recommend the Horus Heresy as a starting point. In my personal opinion they couldn't be more wrong. The Horus Heresy series is full of galaxy spanning reveals, which become spoilers if you are unaware of where the Warhammer 40,000 universe timeline currently sits.

So let's talk about where I think you should start: 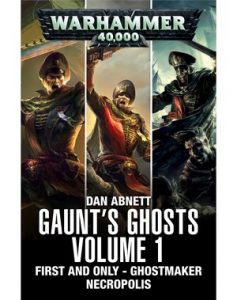 First: Gaunt's Ghosts Volume 1
This book, now released in Omnibus format contains books 1-3 of the Gaunt's Ghosts series by Dan Abnett. This is a fantastic series which I put off reading for way too long because I had no interest in Imperial Guard (now called Astra Militarum - but Imperial Guard is still appropriate) armies.

Boy was I wrong! This series is absolutely fantastic and the first three books, are in my opinion, some of the strongest Warhammer 40,000 writing out there. It will give you a "grounds eye" view, from a very human standpoint, of what it's like to live in a galaxy where there is "only war". 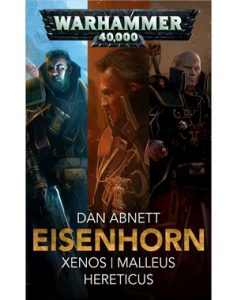 Second: The Eisenhorn Trilogy
Again a series by Dan Abnett. This was one of the first pieces of Warhammer 40,000 lore I ever read and still stands out in my memory as one of the best. Eisenhorn gives you a look into the secret world of The Inquisition. This is a group of incredibly powerful individuals who work to keep The Imperium free of the influence of Chaos, Xenos, and other things that would do harm.

With the power to literally extinguish planets at their command, The Inquisition in the Warhammer 40,000 universe is not to be trifled with. In fact many fear them. The Eisenhorn series will show you how an Inquisitor operates and also demonstrate what it is like to be just a person trying to scrape by and live in the 41st Millennium.

Think of the best spy novels you have ever read, crossed with space travel and demons. You might have an idea of how cool this series is.

And the best part? Once you finish the three Eisenhorn trilogy (now put in Omnibus format), you can continue the story with the Ravenor Trilogy.

Third: Rynn's World
Maybe Space Marines are your thing. Ok great! There is a series of novels titled "Space Marines Battles Novels". These books focus on seminal events in Space Marine history. One of these, is called Rynn's World. This book is now sold with a couple of other related short stories attached and is now called "The War for Rynn's World".

Written by Steve Parker, who is sadly no longer writing for Black Library, Rynn's World details the invasion of the home world of the Crimson Fists Space Marine Chapter by the Orks. This is a great story, where the Orks are portrayed as fearsome as opposed to comical (which they had been in the past). The story is nothing but all out action and adventure. But you also learn quite a bit about the Crimson Fists Space Marines and their Chapter Master Pedro Cantor.

I was surprised at how much I really enjoyed this book and I think you will too. It's a great place to start when learning about Space Marines and how they wage war. 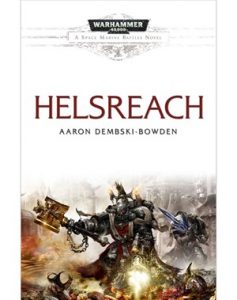 You get an idea of how the Space Marines of the Black Templars Chapter work with each other, how their chain of command works, and more importantly, how they work with members of The Imperial Guard and Planetary Defense forces.

The Author, Aaron Dembski-Bowden, is considered by many to be the best of the Warhammer 40,000 Black Library authors at the moment, and his attention to details and ability to develop characters as well as weave intricate plots out of even the most basic stories is put on display here.

Probably the best of the Space Marine Battle novels to date, and arguably one of the best pieces of Warhammer 40,000 fiction out there. Do NOT miss out on reading this book. 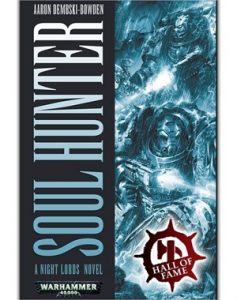 Fifth: The Night Lords Trilogy
Consisting of Soul Hunter, Blood Reaver and Void Stalker, if you are interested in learning more about Chaos Space Marines, this is the series for you! The story follows a war band of Chaos Space Marines known as the Night Lords, and depicts not only how they operate during war but also between engagements.

The struggle for power and dealing with the blessings of the Chaos Gods and other forces who seek to use them take center stage in this incredible series of books.

Once again, written by Aaron Dembski-Bowden, this was his first series and it literally exploded onto the scene. The fans of Warhammer 40,000 Black Library books went crazy over this series and it cemented Aaron as one of the best in the business.

After reading this series, if you want to delve deeper into the realms of Chaos and learn about the largest of the big bad guys - Abaddon, the master of The Black Legion, read through The Talon of Horus. This is an amazing novel (and my personal favorite Black Library book), that gives you insight into the creation of the most powerful Chaos Space Marine organization, is the start of a new series by Aaron and will see new books arriving shortly after this article is written.

So there you have it. That's my list of places to start in The Black Library. Once you have gone through these books, the sky is the limit.

I didn't even mention John French and his incredible Ahriman series, or Guy Haley and his Baneblade series. (Not to mention the latest.. Dark Imperium, which brings you up to date with the changes to the lore between the 7th and new editions of Warhammer 40,000 the rules), or Graham McNeils Mars series (The Forges of Mars Omnibus).

I could recommend a hundred different directions to go as there are so many books to be found at BlackLibrary.com, but this will give you a solid foundation upon which to build. And then, when you are done learning about the Warhammer 40,000 universe as it currently is and want to find out what happened in the past... THEN start in on the Horus Heresy series.