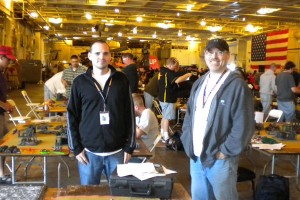 The Independent Characters was formed in April of 2010 by Carl Tuttle and Geoff Hummel. While the two of us always sat around talking about Warhammer 40k, we recognized that this doesn't necessarily make for a good show on it's own. We wanted to bring something new to the Warhammer 40k Podcast Community. The results are what you hear when you listen to our show.

Our mission from the beginning was to make people feel like they were a part of our gaming group, which is quite large and diverse. We advocate for playing 40k in a variety of different and exciting ways. In addition, we constantly strive to bring new an innovative segments to our listeners, while keeping our core anchor segments in place to provide familiarity from episode to episode.

Over the years, our show has evolved and changed. At the end of 2013, Geoff left the show as time became less available. Carl continued the show with a rotating cast of co-hosts drawn from our gaming group when appropriate topics present themselves.

Co-Host regulars Adan Tajada and Justin Keefer join most frequently and have continued to carry on the traditions we have created at The Independent Characters. What are those exactly? I'm glad you asked!

What we WILL do:

What we do NOT intend to do:

So who are "The Independent Characters" anyway? 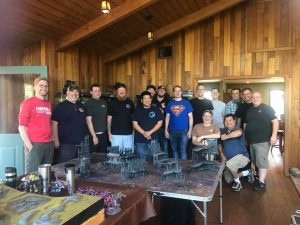 There's a few hosts to draw from...

An avid roleplayer for over 35 years, Carl joined the ranks of the miniature wargamers in 2005 when he finally decided to pick up Warhammer 40k to play with a friend. Soon the purchasing spiraled out of control and the shelves began to fill up with boxes of still shrink-wrapped GW Space Marine product. Eventually he came to his senses, shed himself of his oaths to The Emperor, sold all his Space Marines and dived into the world of Chaos. This was much better as now he pays twice as much for Forgeworld product instead of just plastic GW Product. However, he has now come full circle and added an Ultramarines army to his roster of choices.

Carl is the main host of the show and brings in a regular cast of characters.

Entering gaming through Magic: The Gathering as a young man, Geoff spent nearly a decade stuck on card-flopping until he was introduced to tabletop RPGs in college. It wasn't until shortly before the current Ork codex was released (around 2008) that he moved from a rather enjoyable Mordheim campaign into a full-on 40k addiction. Since then tons of Salamanders Space Marines and an unknown number of the inscrutable Eldar have weaseled their way into Geoff's gaming space.

Geoff started The Independent Characters with Carl, but has since stepped back in his Co-Host responsibilities to spend more time playing others games as well as focus on his private life. He will however, continue to guest-host on the show from time to time. Near the end of 2014 Geoff moved back to his home state of Virginia but will still occasionally check in via Skype.

Justin has been playing Games Workshop games since the start of Rogue Trader. He worked for Games Workshop for a number of years, managing several different GW Stores, before moving on from the company. Justin is an accomplished player, modeler and painter.

Adan is an ex-law enforcement officer from Berkeley, CA and avid gamer of all types. Whether it is board games, card games, Role Playing Games, or most especially Miniatures Games, Adan is open to it. He has a love of Grey Knights and Sisters of Battle, but has recently dipped his toe into an Eldar wraith heavy army.

Adan moved to Arizona in 2019 but frequently flies in to record. That's how dedicated he is.

Josh was introduced to miniature wargames in the very early 90s with Adeptus Titanicus and Epic. He moved on to play 40k in 2nd edition and has been hooked ever since. Not one to pick favorites, he has collected almost every army there is to play over the last 25 years, but persistently comes back to Marines, Necrons, and Eldar. These days his favorite way to enjoy 40k is through narratively focused smaller-scale specialist games, such as Kill Team, Necromunda, or Adeptus Titanicus.

Jody's (aka: PezMan) first exposure to tabletop gaming was when one of his older brothers brought home a Grenadier AD&D miniature. A few years later he saw Blood Bowl advertised in a White Dwarf magazine, and he's been hooked on tabletop gaming ever since. 30+ year later and Jody is still gaming, splitting time between board games and all of Games Workshops amazing models and games.

Been a long time since some Warhammer 40K! Aaron (

Gaming with Chelle, Jody, and AJ during AJ’s vis

Visit to Doug and Jenny’s house for gaming and f

#redbullring We made it all the way from Californi