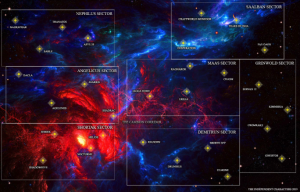 The Somnium Stars Campaign spans many sectors in the Warhammer 40,000 universe. These sectors are clustered around a warp rift to the galactic North of the Cicatrix Maledictum, also known as the Great Rift.

In this region of the galaxy, Imperial forces are cut off from the light of Terra and Chaos runs rampant, hunting the scattered remnants of Imperial loyalists in the area. Meanwhile, the xenos races in the region, those flung into the region by the vagaries of the Warp and those that have always been here, lurking behind the scenes, work to adapt to their new environment and conquer what regions they can.

Be it Imperium, Chaos, or the many Xenos factions, each finds itself isolated in the Somnium Stars and beset on all sides. Only by putting aside ancient enmities and finding common cause can any faction hope to survive...

The objective of the Somnium Stars Campaign is to band together with others of your faction and attempt to drive out all opposing forces while protecting your home sector.

If you are already a Legendary Patron of The Independent Characters Podcast, and are looking to submit a game you have played, click this link here to go to Campaign Game Submission form!

If you are interested in seeing a few piece of the campaign, you can check them out here:

#redbullring We made it all the way from Californi